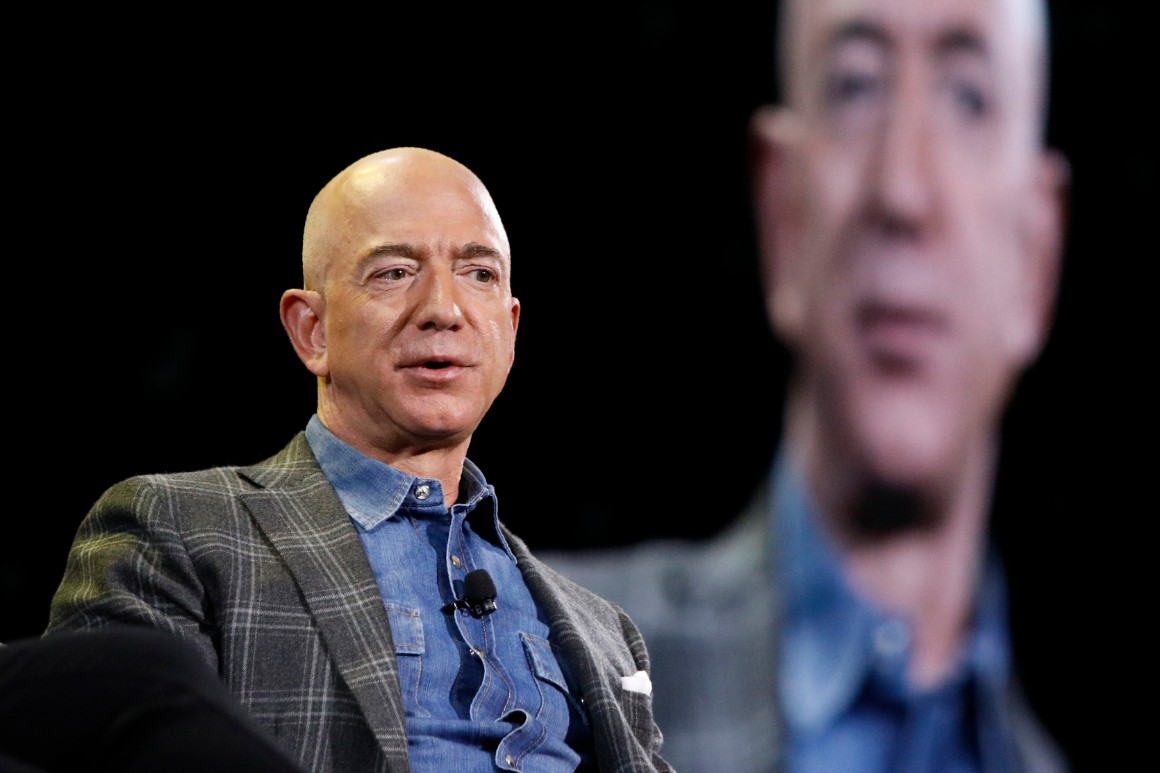 Robert Weissman, president of the advocacy group Public Citizen, said what he sees as Amazon’s flaws were “baked into the company, and Bezos was the baker.”

Said Stacy Mitchell, the co-director of the Institute for Local Self-Reliance, whose work has been widely cited by antitrust regulators, “we’re certainly not going to take our eyes off Jeff Bezos. He deserves as much scrutiny as he’s been getting. He’s the vision.”

Bezos is, at least at the moment, a far more useful stand-in for Amazon in Washington, D.C., than the almost-unknown Jassy.

Bezos, who on many days is the wealthiest human being on the planet, looms large in a town where politicians are eager to appear both close to corporate titans and uncowed by them — especially in the congressional hearing YouTube clips and tweets their offices invariably fire off.

And he could become an even bigger figure on the scene after giving up the CEO role. Mitchell pointed to Bezos owning both the biggest home in the District and The Washington Post, which Bezos said in an email to employees explaining the job change he’d be devoting more time and attention to. “He seems to intend to be very much present in the nation’s capital,” she said.

Taken together, all that means that Amazon’s critics are wary of letting Bezos slip away.

Jassy is a Seattleite who, as CEO of Amazon Web Services, has made the lightest mark in Washington — there’s only a single mention of him in the Congressional Record, and his political giving is limited to $55,000 to Amazon’s corporate PAC.

Amazon did not immediately respond to a request to comment for this story.

Amazon’s critics say they’re particularly on alert about Jassy grabbing the CEO title — and spotlight — from Bezos because they think another big tech company used such a move to try to lessen friction with Washington, D.C.

Technology news from Washington and Silicon Valley — weekday mornings, in your inbox.

Back in 2015, then-Google CEO Larry Page shifted into a role as CEO of Google’s parent company, Alphabet, with Sundar Pichai becoming Google CEO. Page explained the move at the time by saying of Pichai, “I feel very fortunate to have someone as talented as he is to run the slightly slimmed down Google and this frees up time for me to continue to scale our aspirations.”

Afterward, Page was still widely seen as a force inside Google itself, and answerable for its long record. But when, in 2018, the Senate Intelligence Committee invited Page to testify on election interference, privacy and more, Google refused. As lawmakers and the company hit a standstill, the committee ended up settling not for Pichai, but for an empty chair.

The incident was widely seen at the time as a political blunder for Google. But in retrospect, the strategy might have paid off.

Pichai — with a lower public profile than Facebook’s Mark Zuckerberg or Twitter’s Jack Dorsey, though now having replaced Page as CEO of Alphabet, too — got a fraction of the questions from Congress as those two founders received when they testified in a virtual hearing in October.

When news of Bezos’s job switch came, said the Institute for Local Self-Reliance’s Stacy Mitchell, with a laugh, “It was like, ‘Oh, yeah, Google did this.’” Google did not immediately respond to a request for comment.

Of course, Pichai’s low profile in comparison to some of his Silicon Valley counterparts has hardly fixed all of the company’s political problems. The company, for example, still faces a major antitrust suit before the Justice Department and criticism over its handling of political ads.

And Jassy may create some of his own tension in Washington, D.C. He also hasn’t shied away from speaking his mind on even some of the company’s most politically fraught topics.

During an appearance at the 2019 Code Conference in Arizona, he said Amazon executives don’t spend much time worrying about what Washington, D.C., might do to the company, and defended the company’s controversial facial recognition tool, Rekognition.

That software was being hit with complaints that it was being used by law enforcement in racially unfair ways. Jassy stood firm on its utility: “I really strongly believe that just because technology could be misused, doesn’t mean that we should ban and condemn it.”

Still, advocates are channeling a nervousness among their allies on Capitol Hill that the job switch will indeed put Jassy at the congressional witness table, with few answers.

The worry, says Public Citizen’s Weissman, “is having investigative hearings, especially, where Jassy can say, ‘I don’t know. I wasn’t a part of that.’”