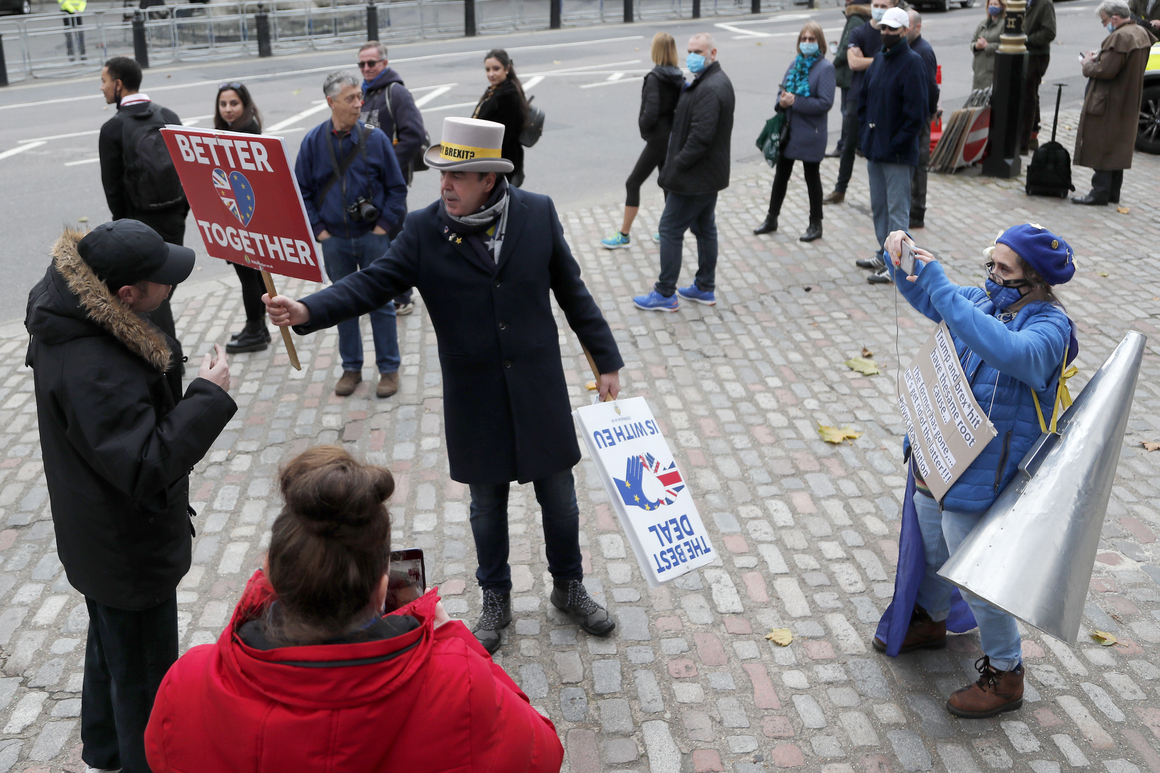 LONDON — Brexit may be almost done but — even if there’s a deal — it could still take another six months.

The EU should “mirror” the U.K. government’s plan to phase in checks on goods moving between Great Britain and the EU even if the two sides agree a free-trade agreement before the end of the year, the British business lobby said.

Josh Hardie, acting director general of the Confederation of British Industry (CBI), said that agreeing such an approach should be part of “sensible conversations” to minimize delay and disruption at ports in early 2021, which is expected regardless of whether the U.K. and the EU can agree a basic trade agreement that eliminates tariffs. An agreement on data adequacy — crucial to ensure the smooth running of trade in services — should also be secured, Hardie said.

In any scenario, the U.K. will be out of the EU’s single market and customs union as of January 1, and traders will be required to submit themselves to new checks and file significantly more paperwork to move goods between the two markets. Different rules will apply in Northern Ireland, but there is also pressure from business for some kind of phasing-in of new procedures required by the Northern Ireland Protocol — the functioning of which is still being thrashed out by the U.K. and the EU.

“We need an implementation period,” Aodhán Connolly, director of the Northern Ireland Retail Consortium, told the House of Commons Brexit committee on Wednesday. “You can call it an adjustment period, you can call it the pink, fluffy bunny period if you like, we don’t care what it is, as long as we get time to be able to move forward on the implementation of these changes.” The committee heard from farming and manufacturing representatives that even basic details like food labeling were yet to be sorted out, with just six weeks to go.

Earlier this year, the U.K. government said full checks on EU imports entering Great Britain would not come into force until July 2021 under its “border operating model.” The move was portrayed as a concession to businesses whose preparations for the end of the transition period have been stymied by the impact of the pandemic.

However, the EU appears unlikely to countenance the idea of a “phase-in” following the transition. There is confidence both in Brussels and in the EU’s national capitals that the bloc’s ports have prepared sufficiently for the new procedures and also a determination not to treat the U.K. as a special case for fear of upsetting other trading partners.

“We’ve been clear before that businesses have to be ready for January 1 and that full EU rules will apply on goods,” said one EU official, adding that the position had not changed since July when an EU planning document set out how governments, businesses and citizens needed to prepare for new measures from day one.

“Businesses have now had a four-year ‘phase-in’ period after all,” the official added.

A senior Irish government official involved in Brexit preparations took a more pragmatic view. He said Ireland was aware the U.K. would phase in checks between January and June and had presumed this approach may be needed by EU states too. However, he added that this was a decision for Brussels.

The official stressed that Ireland had invested in training tens of thousands of firms to cope with the new checks and so sees no need for a delay, although Ireland sees no advantage in making it harder for Britain to implement what was agreed as part of the Northern Ireland Protocol.

The complexity of new arrangements at borders could hardly come at a worse time.

Hardie said that businesses’ resilience had been “stripped bare by COVID” and that, while the first priority for EU and U.K. leaders should be agreeing a trade agreement, the next job would be to reach agreement on a range of issues to mitigate the immediate impact of the U.K. detaching itself from the customs union and single market.

“Sensible conversations can take place between the two sides on how to further minimize disruption,” Hardie said. “Examples include agreeing data adequacy, which is vital for the U.K.’s 80 percent services economy. And the EU should mirror the U.K. government’s border operating model next year by phasing border checks.”

Luisa Santos, deputy director general of lobby group BusinessEurope, and chair of its EU-U.K. taskforce, said that while a phase-in period would be useful, it was hard to see what the legal underpinning would be. A higher priority, she said, would be ensuring that member countries, EU and U.K. authorities can coordinate “emergency response and contact” to address major “bottlenecks” at ports if and when they arise.

“Some disruption is going to happen. I don’t think we should fool ourselves,” Santos said. “We need to find ways to react fast once we have these problems coming, both in the EU and the U.K.”

Ben Butters, CEO of EUROCHAMBRES, the association of national European chambers of commerce, said his group was “not pushing for any kind of short-term second transition phase” and that the “focus right now should be on securing even a basic agreement to avoid tariffs and quotas.”