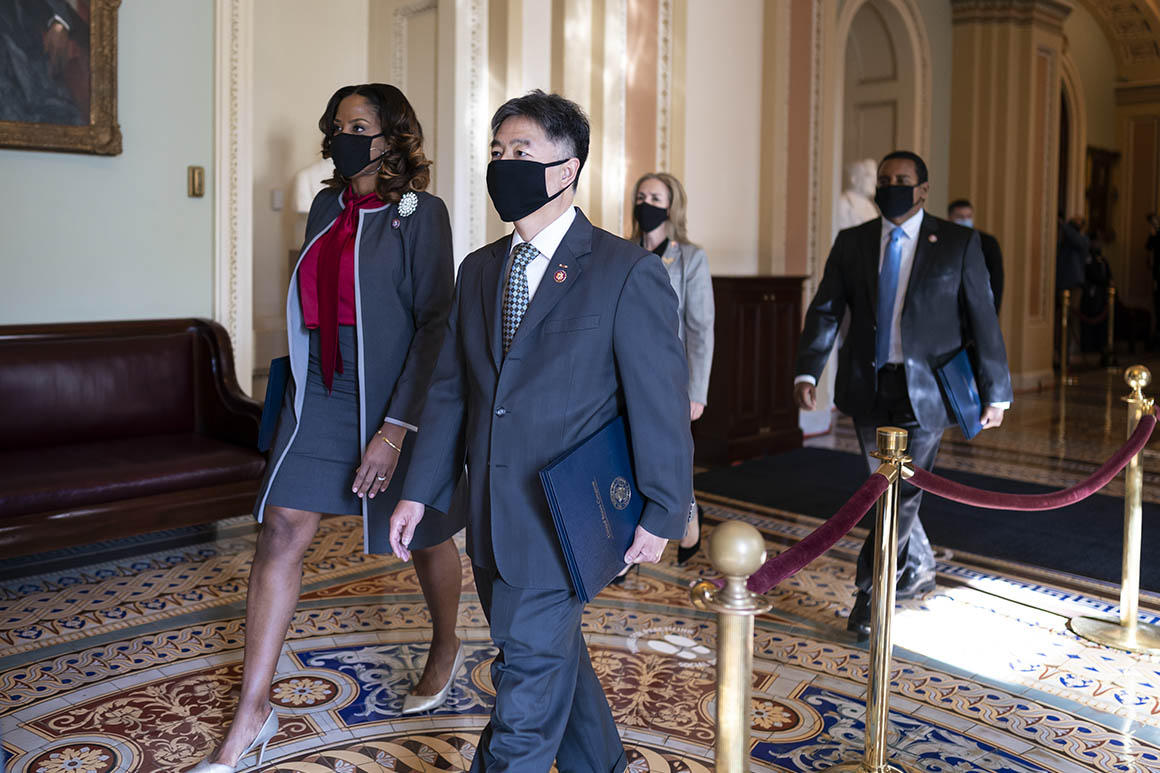 The goal was clear: help rekindle the dread, the fear that enveloped all of them for several hours last month, when fury at Trump for fomenting false claims about the stolen election, and his excusing of the rioters’ behavior, was at its peak.

So far, though, Republicans appeared unmoved.

Sen. Mike Braun (R-Ind.) said the presentation was intended to “knock you off your feet,” but added that GOP senators were looking for new information. “It was kind of a compilation of what we all [saw] on a tragic day,” Braun said.

Sen. Marco Rubio (R-Fla.) acknowledged that the impeachment was singular because “everybody here was also a witness and potentially a victim of what happened on that day.” But he said members had already processed that reality.

The GOP senators’ comments underscored that the Senate is unlikely to reach the two-thirds vote necessary to convict Trump. But Democrats view the emotional appeal as their best possible effort at persuasion.

Rep. Jamie Raskin (D-Md.), the House’s lead prosecutor, told senators he was just a day removed from burying his 25-year-old son, and — still awash in grief — had brought his daughter to the Capitol, guaranteeing it would be safe despite Trump’s calls for supporters to descend on Washington. When it wasn’t, he feared his family was in danger yet again, and he said he was gutted when his daughter told him she didn’t want to return to the Capitol again.

“Of all the terrible, brutal things I heard and I saw that day and since then, that one hit me the hardest,” Raskin said. “That and watching someone use an American flagpole, the flag still on it to spear and pummel one of our police officers, ruthlessly, mercilessly, tortured by a pole with a flag on it that he was defending with his very life.”

Rep. David Cicilline put it more plainly: “They could have killed all of us.”

It was an argument that landed with enormous force in the Senate, especially after Democrats primed the members with a haunting montage of violence committed by those who breached the Capitol.

Republicans and Democrats alike said the House managers hit the mark in their arguments — even if Republicans arrived predetermined to acquit Trump on a technical constitutional argument advanced by Trump’s lawyers.

Trump’s team, led by Bruce Castor and David Schoen, appeared caught off-guard by how well the House team connected with senators. Castor acknowledged that they reshuffled their presentation — which they expected to be more technical — to rebut the House’s sweeping claims. But the result was a muddled argument that had senators murmuring and passing notes to each other and led one of Trump’s 2020 impeachment lawyers, Alan Dershowitz, to rip the defense as a disaster on cable TV.

Castor and Schoen spent their two hours attempting to siphon any emotion out of the day. Castor described the House’s rush to impeach Trump after the Jan. 6 insurrection as a natural human urge to blame someone for a terrible tragedy. Schoen went further, calling it a response to the “insatiable lust for impeachment in the House for the past four years.”

He mounted an argument geared toward a Republican audience, claiming the “snap impeachment” was simply an outgrowth of Democrats’ “bloodlust” to punish Trump since he took office. Schoen played his own montage — set to a spooky soundtrack — of rank-and-file Democrats calling Trump’s ouster from 2017 through 2019. And he then turned to a more technical argument against the constitutionality of the trial, winning the support ultimately of 44 out of 50 GOP senators.

But Democrats made clear that they’re not going to shy away from forcing their Senate colleagues to relive the episode that continues to haunt many of them.

“The managers are trying this case to move the hearts, minds and consciousness of all hundred jurors.