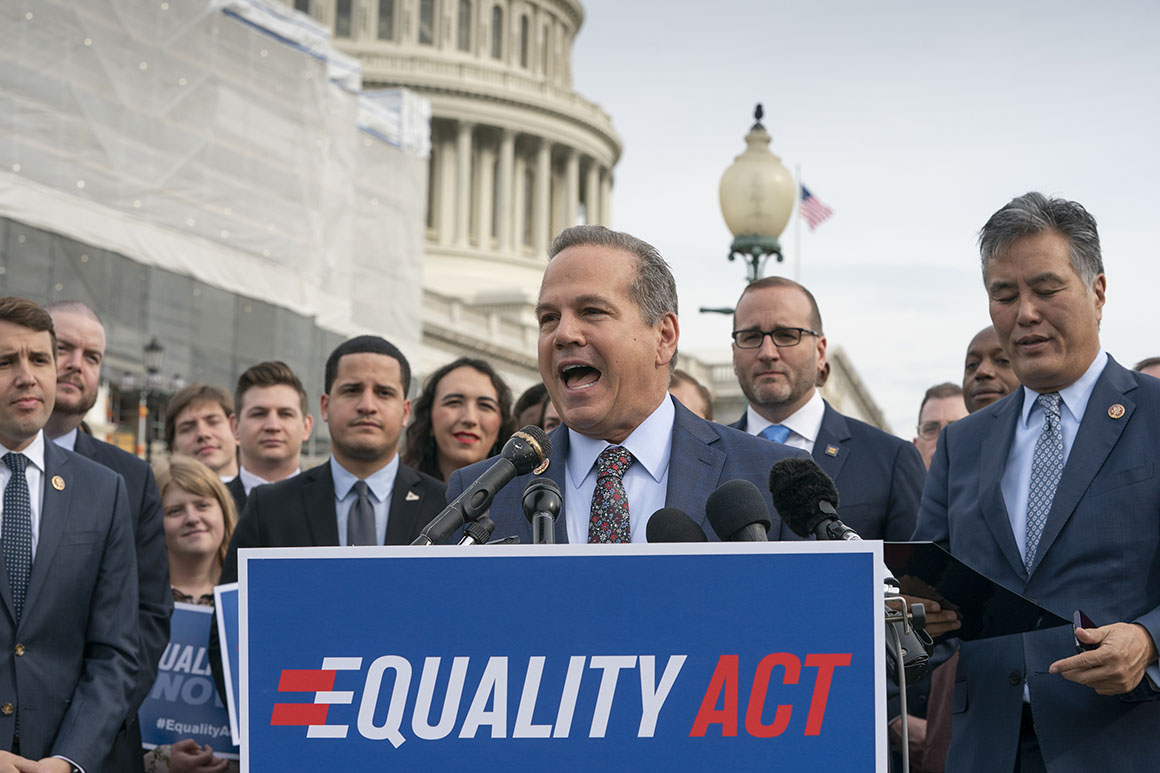 The Greene-Newman incident has revived a thorny issue for the GOP, which has wrestled over its stance on gay marriage and battled accusations that it’s not inclusive or protective of LGBTQ rights. Just last year, former Rep. Denver Riggleman (R-Va.) was censured by his state party for officiating a same-sex marriage; he wound up losing his primary race.

Rep. Dan Crenshaw (R-Texas), who is hosting a transgender person on his podcast next week to discuss military issues, said it’s “pretty damn important” for the GOP to clearly articulate why they oppose this particular bill.

“There’s definitely a wrong way to message everything,” he added.

For Democrats, Greene’s comments about Newman’s daughter only underscore the importance of passing the LGBTQ rights bill, which is unlikely to pass the Senate in its current form. Advocates for the LGBTQ community argue that the sort of federal protections the bill would enshrine are long overdue, especially because more than half of states in the U.S. lack explicit legal protections for those discriminated against on the basis of sexuality or gender identity.

“When you tell people that in a majority of states in this country, you can either be kicked out of your apartment, fired from your job, or denied service in a restaurant because you’re gay or in the LGBTQ community, people think that can’t be true,” Rep. David Cicilline (D-R.I.), the lead House co-sponsor of the bill, told POLITICO in an interview.

The LGBTQ rights bill would ban discrimination in various areas, including the workplace, housing and education, in addition to federally funded programs. The legislation also would expand the 1964 bill to cover public accommodations to include places like shopping malls, sports arenas, and even websites.

The measure’s House passage comes on the heels of President Joe Biden ending Donald Trump’s ban on transgender troops serving in the military. The bill passed the House in 2019, but LGBTQ activists are elated that it now has a shot at becoming law with Biden in the White House.

“It is time to move together to ensure LGBTQ people have the chance to belong, to participate and to succeed in all areas of American life,” Sarah Kate Ellis, president of the LGBTQ rights group GLAAD, said in a statement after the House vote.

Senate Majority Leader Chuck Schumer has promised that the legislation will get a floor vote “at exactly the right time.” But it will need 10 Senate Republican votes in order to beat back a GOP filibuster. That won’t be easy: Most Republicans, as well as some religious groups, warn that the LGBTQ rights bill would chip at religious liberty protections, leading to lengthy and pricey court battles.

House GOP leadership did not formally whip against the bill, but Minority Whip Steve Scalise (R-La.) said leaders have been recommending a “no” vote. Republicans also discussed their gripes with the measure during their weekly conference meeting, and ultimately two went from supporting it in 2019 to opposing it on Thursday: New York Rep. Elise Stefanik and Florida Rep. Mario Diaz-Balart.

The three Republicans who supported the LGBTQ rights bill were Reps. John Katko of New York, Tom Reed of New York and Brian Fitzpatrick of Pennsylvania.

On top of the Republicans and religious leaders who fear the broad language in the bill fails to clarify that “places of accommodation” does not include places of worship, like churches and synagogues. Other conservatives object to the LGBTQ rights expansion outright, arguing it would alter the country’s social fabric by blurring gender lines in women’s sports and other cultural practices.

House Minority Leader Kevin McCarthy (R-Calif.) explained his opposition to the bill in terms of both its effects on religious liberty and women’s sports.

“If you look at Biden’s appointments [of] Cabinet members, suing nuns and others, this really seems like an onslaught against freedom of religion. For girls’ sports as well,” McCarthy said in a press conference. “Now the Democrats have even taken it further.”

Utah GOP Rep. Chris Stewart, who has previously introduced his own compromise legislation aimed at protecting LGBTQ rights as well as religious freedom, said he plans to reintroduce his approach on Friday. It has won support from key religious groups but drawn quick, vocal pushback from civil rights and LGBTQ groups as failing to live up to its middle-ground billing.

“It isn’t an either-or,” Stewart said, referring to protecting LGBTQ rights and religious freedom. “We believe it can be both.”

But that message has been complicated by Greene, who has insisted “there are TWO genders: MALE & FEMALE” and hung an anti-transgender sign outside her office after Newman — whose office neighbors Greene’s — hung a pink and blue transgender pride flag.

On the House floor, Greene argued the Equality Act “will put trans rights above women’s rights,” calling the bill “too much.” She’s already caused plenty of headaches for her colleagues with incendiary remarks, including support for conspiracy theories such as the false claim that mass shootings were staged.

One GOP lawmaker privately dismissed Greene’s behavior as nothing more than attention-seeking, especially after she was stripped from her committee assignments over her behavior before offering an apology widely perceived as half-hearted at best.

But other Republicans went further, expressing worry that Greene’s shenanigans could be a drag on the GOP and turn off the young, moderate and independent voters who will be crucial in the 2022 midterms and beyond.

“This is sad and I’m sorry this happened. Rep. Newman’s daughter is transgender,” tweeted Rep. Adam Kinzinger (R-Ill.), who noted that “this garbage must end” in order to restore the GOP. Greene’s decision to antagonize Newman, he wrote, “represents the hate and fame driven politics of self-promotion at all evil costs.”

Stewart, meanwhile, declined to directly comment on Greene. But, he added, “the less controversial we make this, the better it is. I will say that.”

The GOP’s potential political problems on the issue of LGBTQ rights are hardly limited to the raucous House. Across the Capitol, Sen. Rand Paul (R-Ky.) went after Dr. Rachel Levine, Biden’s pick for assistant secretary of health, who’s poised to become the first ever openly transgender official confirmed by the Senate.

Paul, an ophthalmologist, pushed Levine on her views on medical care for transgender teens, claiming hormone therapy leads to “women with beards” and alleging that young trans people are “confused.”

Levine, a pediatrician by training, responded calmly that transgender health care is “complex and nuanced” and offered to meet with Paul privately to walk through the issue. He responded that she did not answer the question and said he’s “alarmed” by her support for medical care for trans minors.

“It is critical to me that our nominees be treated with respect,” she said.