How a D.C. Bar Became the ‘Haven’ for the Proud Boys 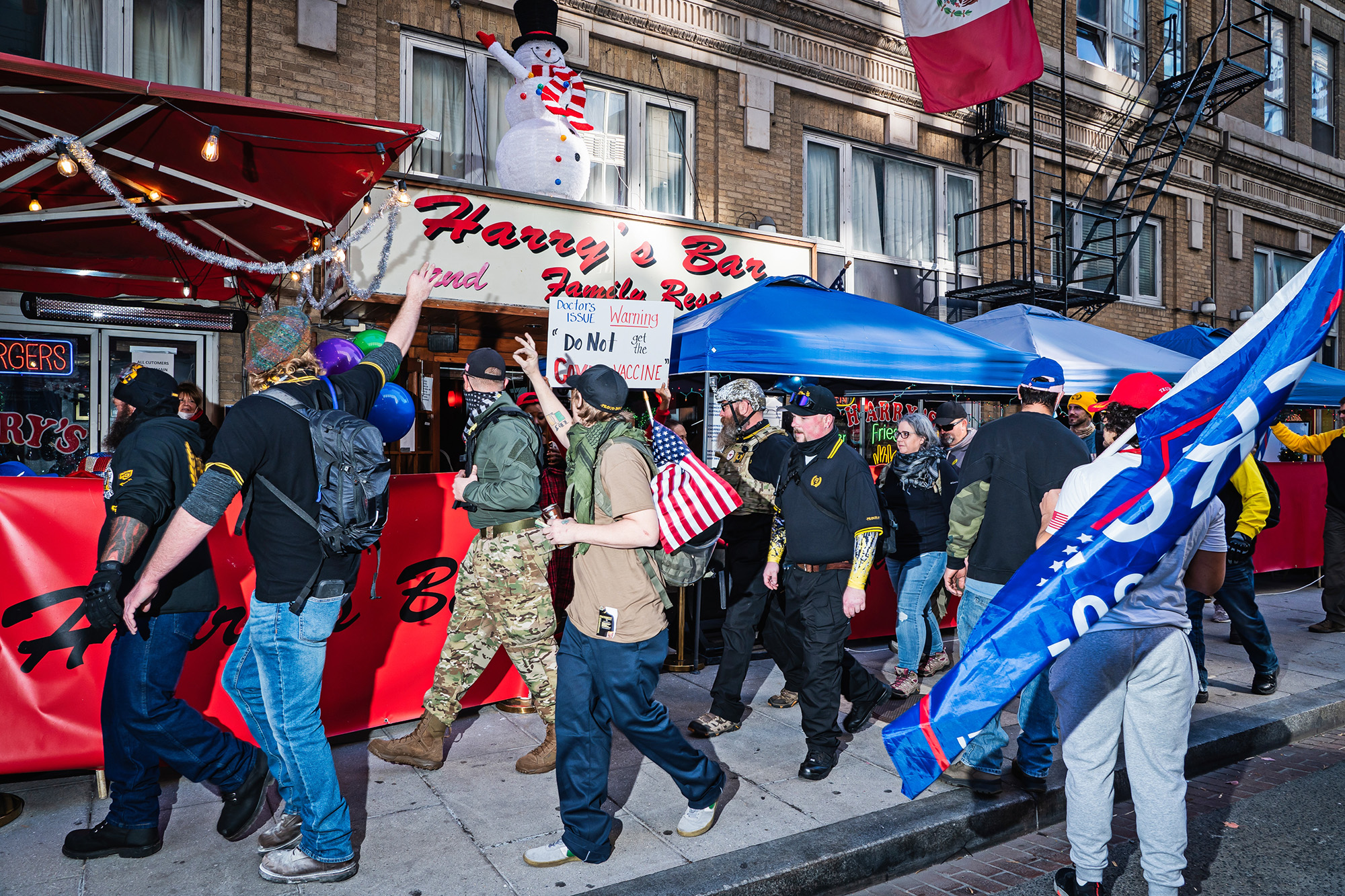 Harry’s first gained traction with the Proud Boys during the Mother of All Rallies (M.O.A.R), a pro-Trump gathering on the National Mall in September of 2017. The rally’s organizers promised crowds of more than a million, but the event ended up drawing closer to 1,000 Trump loyalists, leading some to dub it “the Mother of All Flops.” The Proud Boys, however, were well represented, as were members of a number of other far-right extremist groups, including the Three Percenters, Oath Keepers and American Guard. The after-party coalesced at Harry’s.

In September of 2018, the Proud Boys returned to the bar after the second M.O.A.R., which drew similarly underwhelming crowds. Over Fourth of July weekend in 2019, Harry’s served as the group’s home base during the “Demand Free Speech” rally, a hodgepodge of speeches and marches that the Proud Boys nominally organized. More recently, the bar made headlines this October when Trump retweeted a video of unmasked Harry’s patrons first-bumping Metropolitan Police Department officers and chanting “back the blue” as the officers ordered food. The video triggered an investigation by the city’s Beverage Regulation Administration, resulting in two warnings for pandemic restriction violations.

Meanwhile, the Proud Boys’ adversaries have also taken notice of Harry’s. During the Demand Free Speech rally in 2019, a group of antifascist counter-protesters confronted the Proud Boys on the bar’s patio, which was heavily patrolled by police. The groups traded insults across a line of officers before the counter-protesters dispersed. Violence broke out in earnest this past November, though, when roaming bands of Proud Boys clashed with antifascists and BLM activists in the streets surrounding Harry’s, resulting in at least 20 arrests and a number of serious injuries.

During the second Million MAGA March on December 12, this past weekend, police arrived outside Harry’s in the early afternoon in an unsuccessful attempt to prevent clashes between the Proud Boys and other pro-Trump demonstrators who had gathered outside the bar and counter-protesters who had gathered nearby at Black Lives Matter Plaza. At 4 p.m., Harry’s closed, leaving large crowds of Proud Boys milling around on the sidewalk. (If Harry’s gets a third Covid-19 violation, the pub’s liquor license will be reviewed by the Alcoholic Beverage Control board.) At night, four people were stabbed around 11th and F Street, less than a block from the bar. The police have not yet said who the victims are.

As for the Hotel Harrington, they’re trying to keep away from the controversy. The hotel’s managing director, Ann Terry, recently told the Washingtonian that the bar’s new MAGA scene is “Harry’s responsibility.” “I really don’t keep up with it a lot. We don’t play any part in running things,” she said.

With Trump set to depart from the White House in January, the Proud Boys’ future at Harry’s future remains uncertain. According to Tarrio, the Proud Boys are planning to increase their presence in Washington during the Biden presidency, and Tarrio is considering buying a second home in the area so he can split his time more evenly between the capital and his native Miami.

“I think you’ll see us a lot more often in D.C. now, if Biden assumes the presidency, which is very likely,” Tarrio said. “I can see already by Biden’s posture what his policies are going to be on certain things … and there’s gonna be a f—ton of policies that I’ll probably disagree with.”