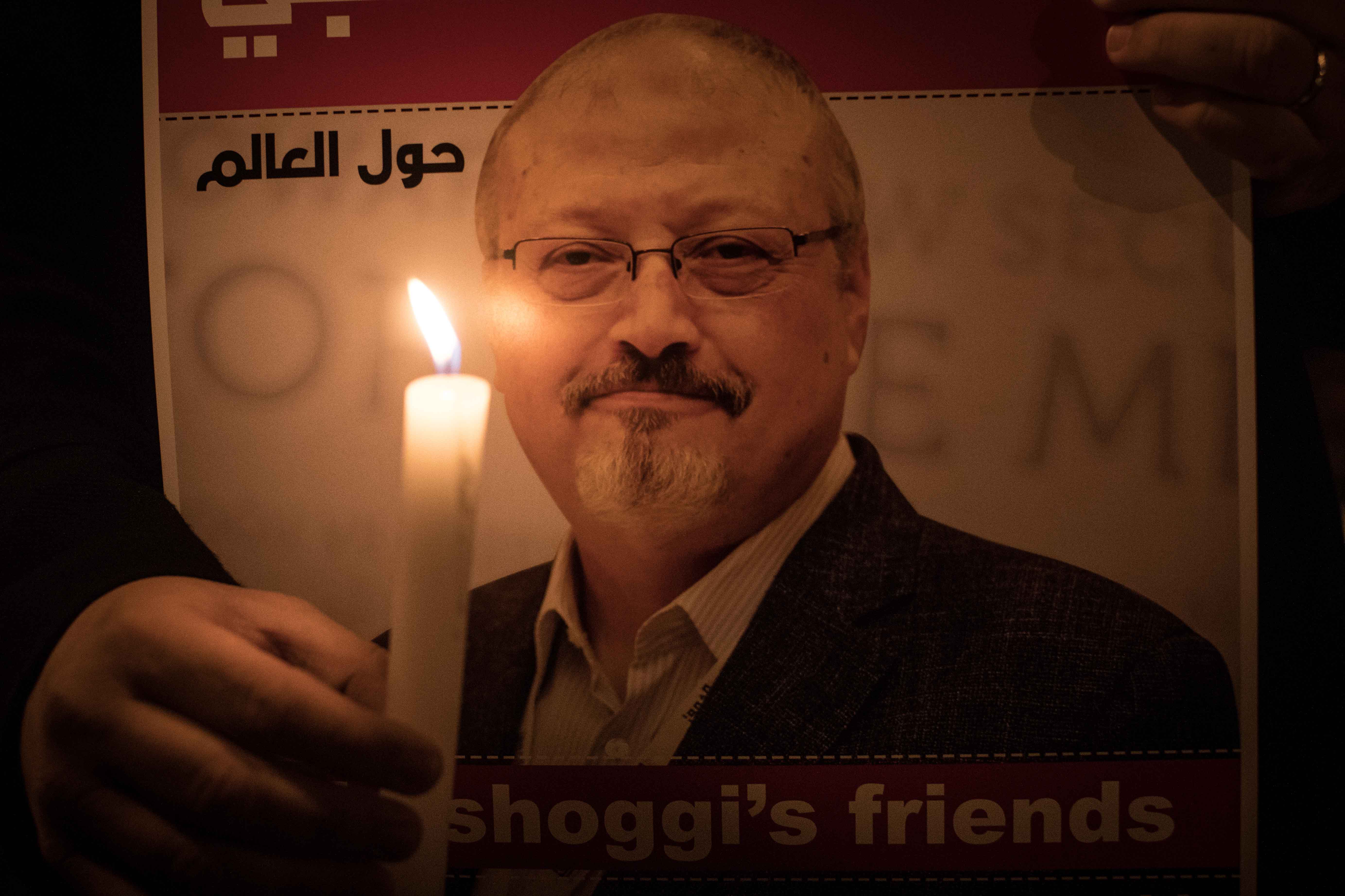 Still, the Biden administration’s actions are certain to reverberate across the Middle East and cast a shadow over the strained U.S.-Saudi relationship.

The Treasury Department unveiled sanctions on Saudi operatives alleged to have been involved, including members of the crown prince’s personal protective detail known as the Rapid Intervention Force. And the State Department announced a new policy called the Khashoggi Ban, which will allow the U.S. to restrict visas for those who target and harass journalists and dissidents. A second senior administration official described the policy as “another means to promote a measure of accountability” among bad actors.

Those moves were deemed insufficient, however, by many lawmakers as well as human rights activists, underscoring the difficulty President Joe Biden and his aides face in trying to hold accountable the de facto leader of an important U.S. partner in the Middle East. It was a challenge that also faced former President Donald Trump, who chose to embrace the crown prince (who is often referred to by his initials, MBS) and refused to release the report despite a law mandating its disclosure.

The Biden administration’s proposals create an opening for Congress to take more aggressive actions. Lawmakers from both parties — who said they were unaware of the White House’s plans for punishing the kingdom — had been pushing for a wholesale re-calibration of the U.S.-Saudi relationship.

House Intelligence Committee Chairman Adam Schiff (D-Calif.) said the Biden administration “should take further steps to diminish the United States’ reliance on Riyadh and reinforce that our partnership with the kingdom is not a blank check.”

The report concluded that “the Crown Prince viewed Khashoggi as a threat to the Kingdom and broadly supported using violent measures if necessary to silence him,” and noted that the team of assassins included seven members of the Rapid Intervention Force, which “answers only to” MBS.

The brief, 4-page assessment was finally released more than a year after it was first completed by the intelligence community under Trump and briefed to the relevant congressional committees, officials said on Thursday.

“We’ve made it clear that this administration will not sweep anything under the rug, and that President Biden will follow the law,” a senior administration official said ahead of the report’s release. The official added that the release was “in honor of Jamal and this horrific crime.”

“Our aim going forward is to make sure nothing like this ever happens again,” the official said.

Khashoggi was a prominent Saudi journalist who was living in the United States and contributing columns to the Washington Post. He was critical of increasing political repression in Saudi Arabia, especially under the crown prince, a brash 30-something who had been appointed to a slate of increasingly prominent official positions and appeared set to rule the kingdom for decades upon his father’s passing.

In October 2018, Khashoggi entered the Saudi consulate in Istanbul, Turkey, to complete paperwork that would allow him to marry his fiancée, Hatice Cengiz. He never re-emerged from the consulate, where Saudi operatives brutally murdered him and dismembered his body.

The Saudi government at first denied knowing what happened to the missing journalist. But, thanks in part to evidence released by the Turkish government, Riyadh eventually admitted that a team of “rogue” operatives had killed Khashoggi. However, it insisted that the crown prince had nothing to do with it.

The State and Treasury departments on Friday announced new policies aimed at deterring human rights abuses in Saudi Arabia and around the world.

A new State Department policy named the Khashoggi Ban will seek to hold accountable nations that target and harass dissidents and journalists, allowing it to restrict and revoke visas to any individual believed to be involved in such harassment campaigns. Those campaigns will also be documented by the department as part of its annual human rights report. Over 70 visa restrictions were imposed immediately on Friday as part of the new policy, including on Saudi individuals. The names were not released publicly, however, in accordance with U.S. visa policies.

Separately, the Treasury Department announced sanctions on Friday on General Ahmed al-Asiri, the former deputy head of the Saudi intelligence services, and on members of the group believed to have carried out Khashoggi’s murder, deemed the Saudi Rapid Intervention Force by U.S. officials and determined to be very close to the crown prince. The sanctions were imposed under the Global Magnitsky Human Rights Accountability Act.

Lawmakers from both parties were pushing for a much more aggressive response from the federal government, with some even arguing that the crown prince himself should face sanctions for his role in the operation.

Sen. Bob Menendez (D-N.J.), who now chairs the Foreign Relations Committee, introduced legislation in 2019 that specifically called for sanctions to be imposed against anyone involved in Khashoggi’s killing, including members of the Saudi royal family.

“If the report reveals what many of us have been saying for some time already, then there have to be consequences — whether that’s in military sales, whether that’s in Magnitsky consequences,” Menendez said ahead of the report’s release. “But I appreciate that the president is speaking to the king and not to the crown price. But at some point, that’s not enough.”

The senior official said on Thursday that relevant U.S. officials and departments will continue to engage with MBS on issues of regional concern. And after examining the issue “extremely closely” over the last 5 weeks, the administration had concluded that there are “other, more effective means” to holding MBS accountable, the official said.

Notably, the Biden administration’s actions this week did not include further restrictions of arms sales to the kingdom. Sen. Rand Paul (R-Ky.), who has consistently pushed for punishments against the Saudis, said that was the best way to entice the kingdom to adhere to international human-rights norms.

“I wish we could be using more [leverage] — withholding weaponry from people in order to try to get them to, making it conditional to try to influence their behavior,” Paul said.

A law authored by Wyden required the intelligence community to assess “the advance knowledge and role of any current or former official of the Government of Saudi Arabia.” The law mandated a public accounting of “the directing, ordering, or tampering of evidence” related to Khashoggi’s killing. The Trump administration never complied with that law.

Biden spoke with Saudi King Salman on Thursday ahead of the report’s release. The White House’s readout of the call did not mention Khashoggi, but said Biden “affirmed the importance the United States places on universal human rights and the rule of law.” The administration did not give the Saudis an advance look at the newly declassified report, officials said, but they were told that it would be released as soon as Friday.

Saudi Arabia: a “pariah” or partner?

During the 2020 presidential campaign, Biden promised to reframe the U.S.-Saudi relationship, including by emphasizing human rights. At one point he referred to the Saudi government as a “pariah.”

From the start of his tenure, Trump and his aides had spent significant ties bolstering the U.S.-Saudi relationship. Trump saw the Saudis as valuable for their willingness to purchase U.S. weapons as well as their desire to contain U.S. adversary Iran.

Although the Trump administration did impose sanctions on several individuals eventually blamed by the Saudi government in Khashoggi’s death, it held off on imposing any penalties on Crown Prince Mohammed. And when Trump’s top officials briefed Congress in the aftermath of Khashoggi’s murder, they strategically avoided pinning blame on the crown prince, lawmakers said at the time.

The White House now insists that the new administration is recalibrating the U.S. relationship with Riyadh. For instance, it has moved to reduce already minimal support for the Saudi-led offensive against Iran-backed Houthi rebels in Yemen.

But the administration nonetheless views Saudi Arabia as an important partner in the Middle East, and it has promised to keep supporting the country as it defends itself against attacks blamed on Iran.

“The aim is recalibration, not a rupture, because of the important interests that we do share,” the senior administration official said on Thursday. But he insisted that the policy was not a continuation of the policies of the Trump administration. “If you look at the totality of the circumstances, it’s a completely different approach,” he said, pointing to the new sanctions and the new visa ban rule.