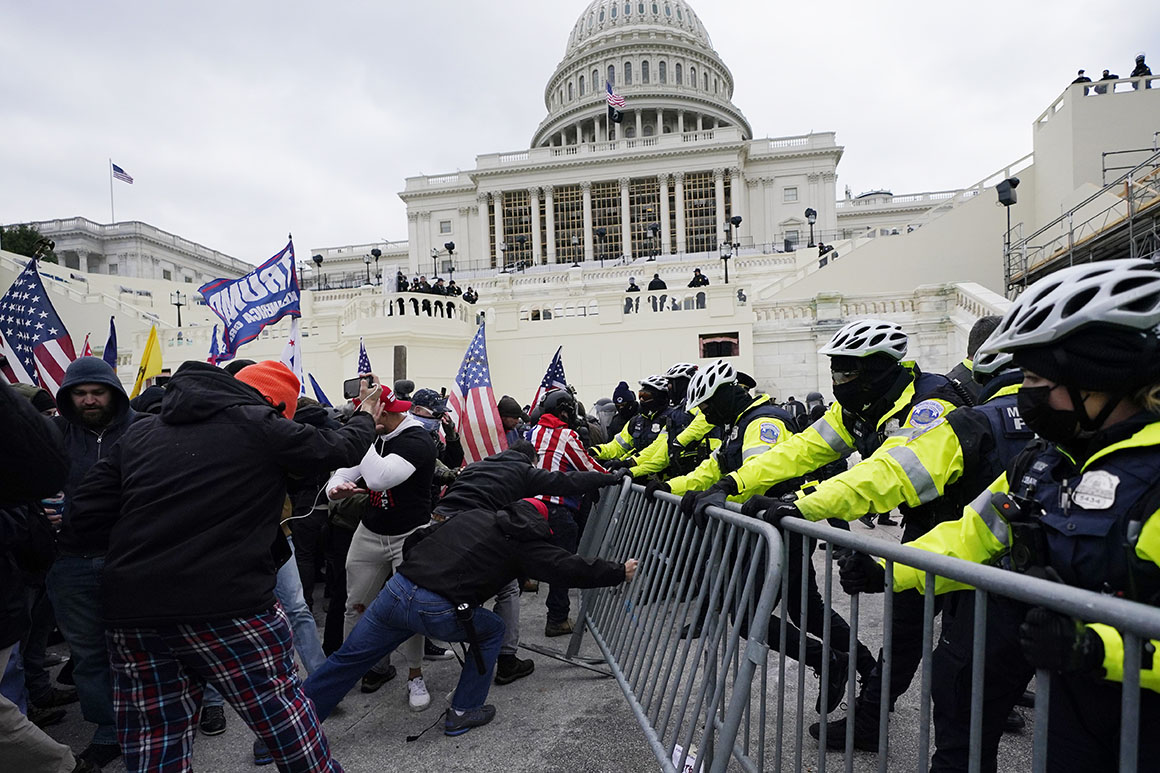 Of those interviewed, 34 agreed Hale-Cusanelli held “extremist or radical views pertaining to the Jewish people, minorities, and women.” One contractor colleague said he discussed his dislike for Jews every day. A supervisor told investigators she had to admonish him for sporting a “Hitler“ mustache (images of which prosecutors extracted from Hale-Cusanelli’s phone).

“A Navy Petty Officer stated that Defendant talked constantly about Jewish people and remembered Defendant saying ‘Hitler should have finished the job,’” according to prosecutors’ summary of the report.

The newly disclosed interview results are the latest evidence that the Jan. 6 insurrection, when a mob of thousands of Donald Trump supporters stormed the Capitol to disrupt the certification of the 2020 election results, included a contingent of white supremacists — in addition to extremist militia and paramilitary groups who used the cover of the mob to breach the Capitol.

Hale-Cusanelli’s case has received attention because of his role in the Army reserves and active employment at a military facility. The new evidence underscores a challenge policymakers have begun confronting on Capitol Hill and across military leadership: how to combat extremist ideologies among service members. Many former military and police were among the rioters.

Prosecutors disclosed the NCIS investigation results in part to rebut a letter of support from one of Hale-Cusanelli’s supervisors at NWS Earle, Sgt. John Getz, submitted by defense lawyers to support Hale-Cusanelli’s release on bond. In a two-page letter, Getz told the court that he was “appalled at how [Hale-Cusanelli] was slandered in the press in regards to him being a ‘white supremacist.’”

“I have never known him to be this way. I know that our co-workers would agree,” Getz wrote, adding “Never have I seen Mr. Hale treat any of his African-American co-workers differently than anybody else, nor have I heard any distasteful jokes or language leave his mouth.”

Getz also recalled that Hale-Cusanelli would “walk up to new people and ask ‘You’re not Jewish, are you?’”

“He described Hale-Cussnelli’s demeanor as ‘joking but not,’” according to the summary of the report.

As a result of the contradictions — and the fact that the letter of support was undated and unsigned — NCIS investigators visited Getz on March 9, prosecutors revealed. In an interview, he acknowledged writing the letter and that it contradicted his statements to NCIS in January.

Hale-Cusanelli’s lawyer, Jonathan Zucker, arguing for his pretrial release earlier this month, emphasized that Hale-Cusanelli had not been charged with committing any violence on Jan. 6, joined no anti-government groups and is accused of little more than entering the building and verbally harassing a Capitol police officer who deployed pepper spray at the crowd.

Zucker argued that the government’s characterization of Hale-Cusaneli as a white supremacist and Nazi sympathizer was inaccurate.

He also called Hale-Cusanelli’s YouTube channel “controversial,” but primarily about local New Jersey politics. And he said the government’s discovery of Hitler’s “Mein Kampf” and “The Turner Diaries” at Hale-Cusanelli’s home “does not mention that there were hundreds of other books in Mr. Hale-Cusanelli’s collection.”

Prosecutors rebutted those claims, revealing that Hale-Cusanelli’s phone was packed with anti-Semitic and racist content. And they contend his views were the animating impetus behind a “fantasy of participating in another Civil War.” His discharge from the Army and debarment from work at NWS Earle as a result of his alleged actions would leave him more time to pursue those goals if released pending trial, prosecutors say.

“If nothing else,” Assistant U.S. Attorney James Nelson wrote, “the events of January 6, 2021, exposed the size and determination of right-wing fringe groups in the United States, and their willingness to place themselves and others in danger to further their political ideology.”