Turtle rescue groups say they have never seen so many cold-stunned turtles in need of help after a brutal winter storm hit Texas this week.

The state has seen temperatures fall as low as 0 Fahrenheit in recent days, which has put sea turtles in a state of lethargy, leaving them unable to swim.

“Cold stun events have been documented since 1980 when the sea turtle stranding and salvage network was established. This is truly a record-breaking and Herculean event.”

The volunteer group plans for cold stun events every year. It is typical for sea turtles to require assistance when temperatures fall, and between 100 and 500 of the animals come into their care annually.

Knight said: “However, we do not plan for more than 4,700 cold stun turtles in one event.”

It is not clear how many of the turtles will survive this year. The turtles are being monitored by staff, who are looking for injuries as well as observing their vital signs and weight.

However, Knight said Sea Turtle Inc. remained optimistic. According to the group, some of the turtles could be released back into the Gulf of Mexico as early as this weekend, or by early next week.

She said: “At this point the prognosis for many to recover is positive but we will know more as the days unfold.”

Texas State Aquarium (TSA), which is also involved in the rescue efforts, said it had received “15 truckloads full of cold stunned sea turtles” on Thursday. They expect to receive well over 1,000.

According to the aquarium, the number of cold stunned turtles is so large this year because many sea turtles had remained in shallow bay systems on the Laguna Madre, a lagoon in the western coast of the Gulf of Mexico, since temperatures have been mild in recent years.

This time, the animals did not get the normal “thermal cues” that warn them to move away from the shallow bays, “and by earlier this week, it was too late.”

Cold weather can be lethal for sea turtles due to the low temperatures and also because they may get injured by being washed against rocks. When temperatures fall, the cold-blooded animals cannot maintain their body temperature internally and subsequently become unable to swim. They may also develop illnesses such as pneumonia.

Rescue efforts have involved the use of large indoor buildings such as the South Padre Island Convention Center. Ed Caum, its director, told The Associated Press on Wednesday this week it had taken in over 3,500 sea turtles, but said: “We know we’re going to lose some.”

Power is an issue. Hundreds of thousands of people in Texas were without electricity on Friday according to the poweroutage.us website, as this week’s winter storm has severely disrupted the state’s grid, freezing pipes and instruments.

Sea Turtle Inc. said they had been provided with a generator by Elon Musk‘s rocket firm SpaceX after all 10 of their facility’s heaters were taken offline by the weather.

On Thursday evening, Knight said they had scaled back activity at the organization’s makeshift hospitals to allow the turtles “calm, quiet, and healing time”.

The group is currently asking for donations, which can be made via its Facebook page or website. People who have found turtles can call Sea Turtle Inc. on 956-243-4361 or the Turtle Island Restoration Network at 1-866-TURTLE5. 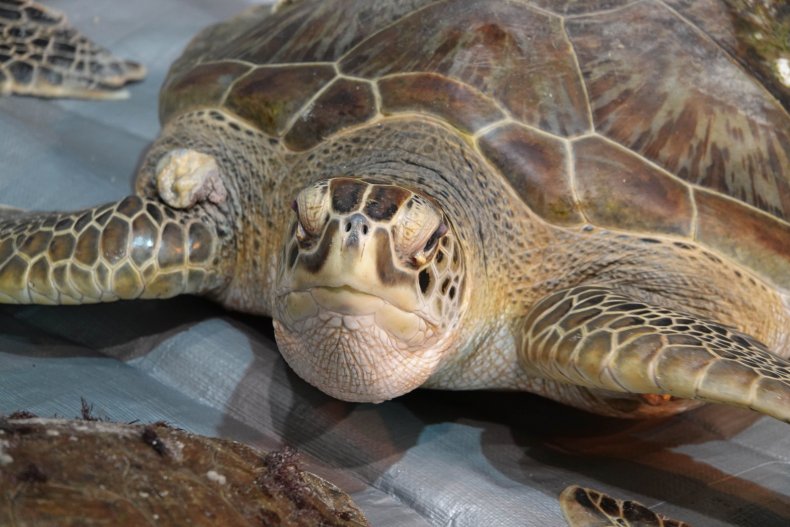 One turtle looking upwards. Cold-stunning makes turtles lethargic, meaning they may not be able to swim to warmer areas.