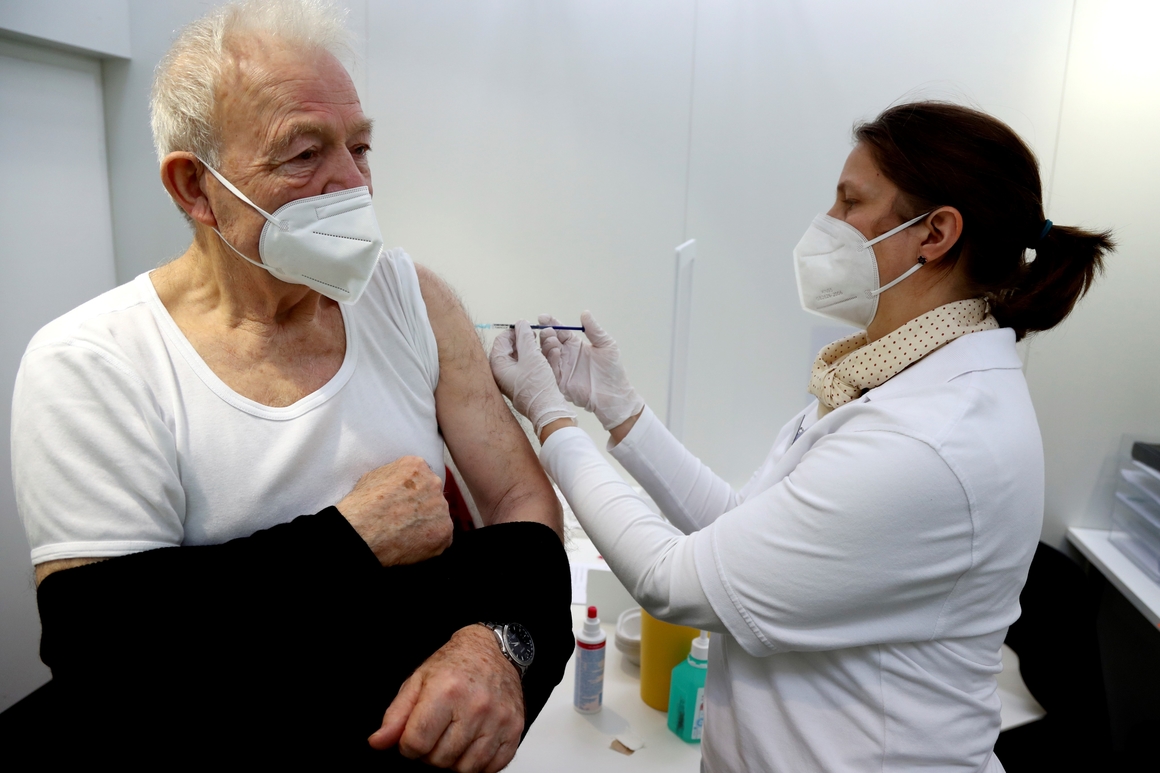 European Commission officials on Monday reiterated a barrage of vague threats about blocking coronavirus vaccine exports but could not explain what precisely they planned to do, when they planned to do it or how it would actually lead to more doses injected into EU citizens’ arms.

So after yet another day of far more questions than answers about the EU’s slow-rolling vaccine campaign, only this much was clear: the continued stumbling in Brussels was not going to stop the grumbling among citizens and EU national leaders ahead of a virtual European Council summit on Thursday.

The Commission’s threats, which President Ursula von der Leyen first articulated last week, are nominally directed at the U.K. — the one vaccine-producing nation that has been receiving doses produced on the European Continent, but, by all accounts, is not exporting any doses produced domestically.

The British government — and the British people — have reacted angrily to the EU’s sabre-rattling, and Prime Minister Boris Johnson has reached out to European counterparts trying to head off any new restrictive measures that could bring pressure on him to respond. Some allies are already urging him to hold his fire, even if the EU takes action, to avoid setting off a trade war that could disrupt delicate supply chains.

But, for the moment at least, the Commission held its fire.

“Look, we are not going to speculate on the tools or the actual details of what it is that we could suggest in order to achieve the objectives,” the Commission’s chief spokesman, Eric Mamer, said. “Our issue indeed is with the underperformance, under-delivery of vaccines compared to what is in our contracts with these companies and that is the issue that we want to solve — how to make sure that companies deliver to the EU as per contract.”

But while Mamer, speaking at the regular midday news conference, referred to multiple companies, the Commission’s wrath right now is directed only at one: AstraZeneca, which is tens of millions of doses behind what it promised to deliver.

As one way to potentially redress that shortfall, the Commission is looking at the possibility of restricting AstraZeneca vaccine exports manufactured at a plant in the Netherlands run by a subcontractor, Halix. And on Monday, Dutch officials indicated they would cooperate with a Commission decision to ban such exports.

But it is unclear if that would even help. Internal Market Commissioner Thierry Breton, the EU’s point-man on increasing vaccine production, previously said the Halix factory had not been shipping doses to the U.K., though that may have changed.

As a separate complication, the European Medicines Agency has not yet authorized the Halix factory to manufacture vaccines for the EU. The snafu appears to be a technical oversight that was as much the Commission’s fault for not insisting that AstraZeneca seek such authorization as it was the company’s fault for not doing so. That approval is now in process, Mamer said.

Mamer insisted repeatedly throughout Monday’s news conference that the Commission’s goals were simply to force vaccine manufacturers to follow the EU’s purchase agreements and to achieve “reciprocity” from other vaccine-producing countries getting EU-made doses — again, namely the U.K.

He defined reciprocity as the export of either finished vaccine doses, or of raw materials needed to make vaccines.

At the same time, he confirmed that even if the Commission were to block exports, it did not currently have legal authority to seize unshipped vaccines and repurpose them for EU countries. Such a move would require additional emergency measures and could risk violating World Trade Organization rules, as well as further undermine the EU’s reputation as a champion of international rules-based free trade.

“This is not about banning vaccine exports,” Mamer said. “It’s about making sure that we are in a position to receive the vaccines that are foreseen for Europe.”

Journalists and some national officials were still left wondering how the Commission would actually guarantee delivery of the expected vaccines, something it has yet to be able to do with AstraZeneca. So far, the Commission has blocked just one shipment with Italy’s support — of AstraZeneca vaccines intended for Australia. On Monday, Mamer said the Commission did not know what happened to the stymied 250,000 doses and referred questions to the company.

EU leaders are due to discuss the vaccine export issue during their videoconference summit on Thursday. But because they are not meeting in person, they cannot take any immediate, formal decision.

There has been some speculation that leaders, who are under increasing political pressure over the slow pace of vaccinations, may want to broaden the export bans to focus not just on AstraZeneca but also on BioNTech/Pfizer, Moderna and potentially other producers who so far have met their contractual commitments to the EU.

Such a move would not only draw the ire of the companies but also of other countries, including partners like Canada, Australia and Mexico, which are purchasing vaccines from EU manufacturers.

In issuing her new threats last week, von der Leyen offered a rationale for blocking exports more widely — a move that while controversial might actually lift vaccination rates in the EU. Coincidentally, it might also give a boost to Germany’s governing Christian Democratic Union party in a super election year.

But other EU countries said they would oppose such an aggressive move, warning that von der Leyen’s incendiary approach was risking the EU’s reputation in an attempt to play to a German audience.

“I’m increasingly feeling like a we’re all just part … of a German election play,” said one EU diplomat.

Two EU diplomats said only France and Italy were clearly in support of a broader export ban, while Germany’s position remained unclear. And France was the only country to openly back that new high-risk approach.

“I support the announcements made by the president of the Commission … in particular to require reciprocity,” President Emmanuel Macron said last week.

Officials from countries including Spain, Sweden and the Netherlands said they were against blocking exports of vaccines from companies that were fulfilling their contracts.

With EU countries divided and leaders meeting virtually, it seemed unlikely there would be a resolution of the debate this week.

Meanwhile, European Council President Charles Michel’s previous effort to challenge the U.K. to reveal how many doses it has exported seemed forgotten amid the noise of the Commission’s threats — not to mention London’s warnings about the possibility of a damaging trade war.