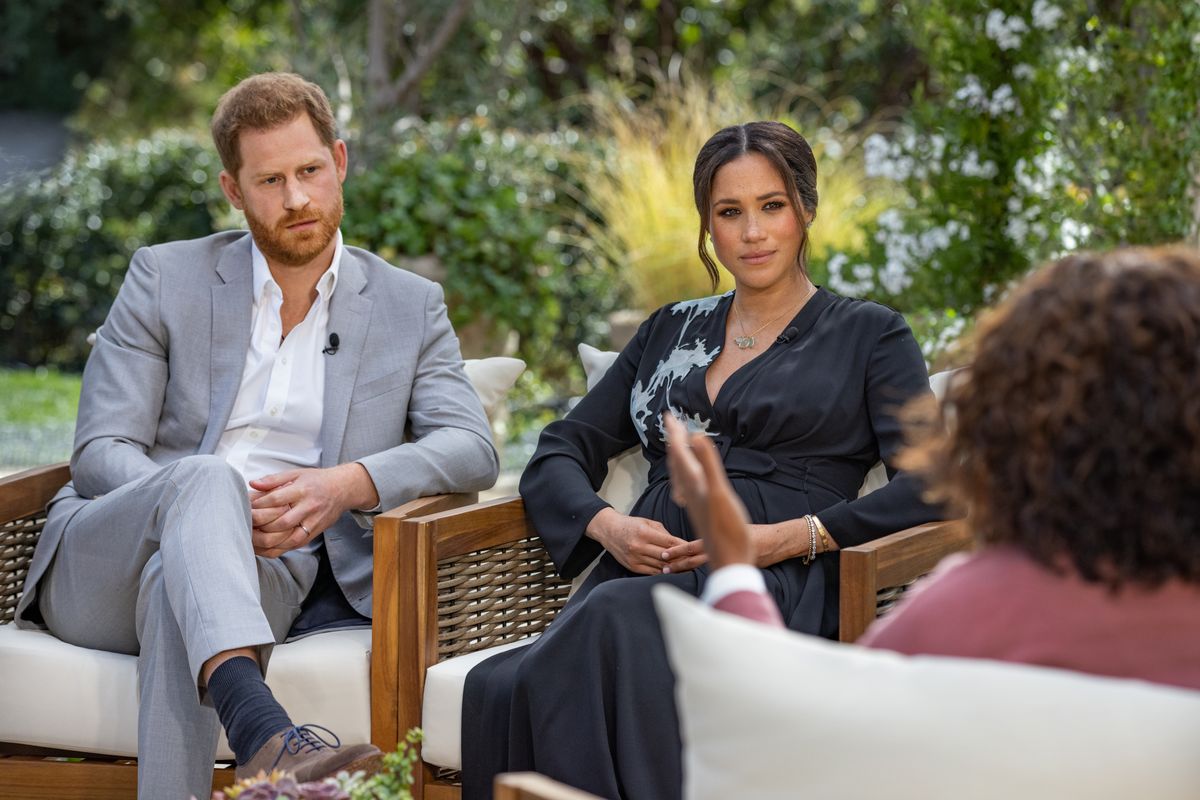 Britain’s destructive culture war is opening up a new front sparked by explosive allegations from Prince Harry and his wife Meghan Markle, the duchess of Sussex. But for now, the U.K.’s ruling Conservatives are staying out of the rough and tumble — with some mindful of the high constitutional stakes.

In a 2-hour interview with TV host Oprah Winfrey which aired in the U.S. on Sunday night and on U.K. terrestrial TV on Monday, the couple claimed that before their son Archie was born, there had been “concerns and conversations” with one member of the royal family over the color of his skin.

Asked by Winfrey whether there were concerns her child would be “too brown,” Markle said: “If that is the assumption you are making, that is a pretty safe one.” Winfrey later confirmed on Harry’s behalf that the remark was not made by the queen or her husband.

The opposition Labour Party leapt into action, with Shadow Education Secretary Kate Green calling on the palace to investigate the claims, while her boss, party leader Keir Starmer said they “should be taken seriously.” But Prime Minister Boris Johnson and most of the Conservative Party have been trying to keep out of it.

The only minister to go on the record with a strong opinion was the foreign office’s Zac Goldsmith — a member of the House of Lords — who tweeted: “Harry is blowing up his family. What Meghan wants, Meghan gets.”

Other minsters have tried to diffuse tensions. Alister Jack, the secretary of state for Scotland, told POLITICO he had not watched the interview and didn’t want to comment directly. But he added: “Like all families they have had their troubles in the past but all families recover and move forward from that and I’ve no doubt this family will as well.”

“[The queen] and her husband are probably the most famous and loved couple in the world. I have nothing but admiration for her,” he said.

Others are mindful of just how toxic the racism claim is for the royal family and for the U.K. more broadly. “When it leaks, as it inevitably will, about who made that remark [about Archie’s skin color,] some of the consequences for the monarchy are pretty serious in modern Britain,” said a former Tory minister.

Rapid polling since the claims were made public suggests that among voters, reaction to the interview splits down party lines. A snap YouGov poll of 4,654 adults on Tuesday, taken after the interview had been broadcast in the U.K., found 38 percent of Labour supporters had the most sympathy for Harry and Meghan, in contrast to just 8 percent of Conservatives. By contrast 64 percent of Conservatives said they had most sympathy for the queen and wider royal family.

But a second former Conservative minister cautioned against playing to the party base. “It is one of those things you have to think about your reaction to in the sense it might seem safe territory to be anti-Meghan because your voters are probably anti-Meghan, but you have to think forward to the future,” they said. “The future are young people and obviously people from an ethnic minority background are probably quite sympathetic to Meghan, and if you end up alienating them that might cost you further down the line.”

The reaction also divides along generational lines. Forty-eight percent of 18-24 year olds and 28 percent of 25 to 49 year olds were most sympathetic to Markle and Prince Harry compared to just 9 percent of the over 65s.

There may also be quiet sympathy for the Sussexes on the Tory benches. A handful of Tory MPs, including Gillian Keegan and Vicky Ford who are both now ministers in Johnson’s government, signed a letter in 2019 organized by the Labour MP Holly Lynch expressing solidarity with the Duchess of Sussex over her treatment by the press.

The majority of signatories came from the Labour Party, although Lynch explained many Tory women would not have been in a position to sign the letter because they were on the front bench or did not see her original email.

“There will be mixed views about the royal family across the political benches, but what I would hope all MPs are concerned about is challenging discrimination, bias and racism and that is what I would hope unites MPs. It is certainly what unites all Labour MPs,” said Lynch.

Antoinette Sandbach, a former Conservative MP who defected to the Liberal Democrats in 2019 and signed the Lynch letter, said: “I am as big a royalist as you get. I am a huge fan of the queen, I wrote to her as an MP enclosing birthday cards from my constituents. I am a massive, massive fan of the Royal family, but I do think they are getting this wrong.”

“I really hope they keep the way back open for them both. I thought Harry came across as very credible. I have a lot of sympathy for them,” she added.

The second former Tory minister added: “I think if people circle the wagons and say the best way of dealing with this is to trash Meghan they will miss the opportunity to totally modernize and adapt the monarchy. It would be an amazing thing if people actually leaned into this and said are there lessons that can be learned from this. Meghan and Harry made some important points.”

People should not be quick to choose a side in the transatlantic PR battle. “I don’t think that is the right approach,” he said.